Recently, Bar-i co-owner Jamie Edwards sat down with local mixologist Anika Zappe to discuss the state of the Denver bar industry. Anika has been working in bars along the Front Range of Colorado for over 20 years, and she has developed a wealth of knowledge about the industry.

She has seen it all during this time, working in dive bars such as the PS Lounge as well as higher end establishments such as Root Down and Central Bistro & Bar. This past year, Anika worked as brand ambassador for Diageo, one of the world’s largest liquor producers, including brands such as Johnnie Walker, Crown Royal, Ketel One, Don Julio and Tanqueray. This varied background has provided Anika with a unique perspective on the industry, which she shared at length with Jamie.

Anika Discusses Getting Started in the Denver Bar Industry

Jamie: How did you get your start into the industry?

Anika: A little over 20 years ago, I played in a band and there was a bar on...there still is a bar on East Colfax called the PS Lounge. They would have guest bartenders and they would invite musicians and local "celebrities" to do it. My bandmate and I bartended and I had so much fun I thought I'd try and make a job out of it, and back then that was before the internet. I looked in the classified ads, was going to lie and said that I had experience since I did it at the PS Lounge.

And I saw that they were actually advertising for a bartender. I went to the PS Lounge and asked them to give me a real job and they did. I was there off and on for 12 years.

Anika Discusses the Appeal of the Bar Industry

Jamie: What do you like about the industry? I always say the thing for me is we're in the business ensuring guests have a good time. When we have time off, most of us choose to spend our precious and money time in bars and restaurants. It's fun, but what appeals to you about it after 20 years?

Anika: I think that there is a lot of interesting things about it. Definitely, the camaraderie, the atmosphere, the energy of working in the industry is important. It's always something different; it keeps you on your toes. Any half lunatic bartender I know kind of gets a weird sick thrill off of the Friday night crush.

I think you touched on it, too, it's a great set of people in this industry and I've said it a bunch of times, bartenders I think are my favorite people in the world and definitely they're hardworking, they know how to be friendly and considerate to people who are even assholes to them. They tend to be problem solvers. They like to laugh and have a good time. You know, the majority of them have a really good strong work ethic. I would want them on my idol team.

Jamie: What are your thoughts on where we're at currently in the industry? Particularly in Denver, it's exciting. There's a lot of growth, there has been changes, perhaps we're moving away from Jack and Coke and towards making interesting cocktails, and the craft beer industry has taken off here. What's your spin on where we've gotten to and what changes have you seen over time? 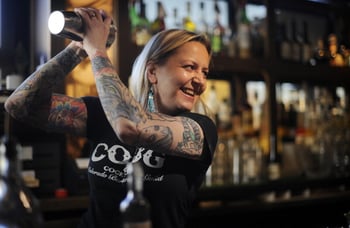 Anika: Yeah, I can speak to Denver pretty well. I feel like it’s been a little while since I've ventured outside of Colorado so I don't know what's happening as much in the rest of the world. Denver's industry has just grown by leaps and bounds in the last 10 years and I think when I started down this path, I just wanted to be able to get a good old-fashioned. And now you really can. It's really become a norm for a bartender to understand at least those simple classic cocktails, so that's good. Denver's industry specifically is just blowing up right now. I think that it's almost too much to keep up with.

There have been some really great quality bars and restaurants with strong cocktail programs opening up. Even the old heroes of our Denver industry scene are still doing well. You know, a lot of those people aren't losing any footage.

We're getting new population here all the time and I always say it's alcohol, there is enough for everyone. Some people act so competitive and I do feel like something is probably going to bottom out in a little bit because there is so much growth and so many new places opening up.

I feel like the places that aren't as prepared, that don't have as much experience in the industry and in Denver's industry specifically are probably not going to last very long. Hopefully, I'll buy one of those places on a fire sale in a couple of years and have my bar.

Jamie: What about the things you see looking forward? What’s your spin on what you expect to see or are excited about in the future?

Anika: I think something that started when the housing market tanked a few years ago, that I read a lot of articles about, is that people are craving community more than big experiences. I think that’s being felt in city centers or in suburbs with an area that has strip malls and chain restaurants that you can go to.

People are enjoying populating places that feel more like a small town where you can walk down the street to get there. We still have big box options a short drive away, but I think like the place we're sitting in right now is a good example of bringing some quality dining to a suburb that's not necessarily a city center. Technology is helping people not have to congregate in city centers any more. I would argue that's not sprawl, because it doesn't have that big suburban housing tract feel to it.

People want to see more small businesses in their communities and in their neighborhoods. They want to congregate at places that they feel connected to. That's really what this industry is about – food and drink and dining gives people a place to gather. People can eat and drink at home. They don't need to go out and do it. But it's an opportunity for people to be social and connect to their community so taking it off of the 16th Street Mall and bringing it to Inglewood is the way things are moving literally.

Jamie: As a Brit, we don’t have those open ballots where you vote on specific measures, so I think the fact that we have that ability here is a great reflection of our democracy. A lot of these initiatives seem great in theory when you read about them, such as the minimum wage increase. I generally philosophically have some sympathy for the idea of a minimum wage and having to work full time. You’ve got two parents and they should be able to afford to take their kids on vacation from time to time. But I don’t think the adjustment for the tipped wage credit has been well thought through. I think it’s going to place a bit of a burden on small businesses. What are your thoughts on the minimum wage increase? 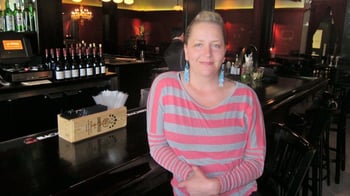 Anika: It's a really interesting question that's put forth. I think it has kind of two answers – one that relates to the general public and then an answer based on our industry.

In general I think it's a good thing. I definitely agree that people need to earn a living wage and that it hasn't caught up with our rate of inflation and our cost of living. Especially here in Denver where it's gotten pretty “high” in the last two years, pun intended.

But I also realize that it's going to make it a lot harder for small business owners across the board. Especially, in our industry, we do have that tipped income wage and I also don't understand exactly how the new changes in minimum wages are going to affect that.

I've been interested for a long time on some modes of thinking about changing that aspect to the pay in our industry. I've definitely been at work on a Friday night where I'm walking out of there with a couple hundred bucks. The dishwasher, the line cook, these guys who are working just as hard, if not harder, are making considerably less.

And there is a crisis in our industry right now in that back of house world that people just aren't willing to stay committed to jobs. They're not paying what people want and need to keep them there. So I really think in our industry the whole idea of wage and payment needs an overhaul. I know a lot of people are reactive to that, especially like myself – I've grown up in the service industry where you made your money off of tipped income and you pride yourself on being a service bad ass so you can walk home with the most money.

You do take that personally, but I believe that there is a way to change that system. That was something that was created I don't even remember how many...like a 100 years ago. It was almost like a form of slavery or servitude to have to work for tips instead of a real wage. Maybe we can value what it is that is that we do as an industry enough to price things accordingly to pay people accordingly. I absolutely think that bartenders deserve to make a ton of money because I've always felt that bartenders are one of the only roles in a restaurant environment that are responsible for creating a consumable product and having face time and serving guests and creating that experience for them. It's like a chef, you know, serving the dining room.

You have cocktail servers, but more than any other role in a restaurant I do think that bartenders have to be multi-faceted and good at all those things to excel at it. You know, that's five years down the road for people to value that, but I guess that would be my answer on minimum wage. Yes, I think it's good for our culture in general. People need to be paid a fair living wage and that's not keeping up for our industry. I believe we need to take a good hard look at how everyone's being paid because if we can't afford to keep a back of house, that's not going to help the front of house much either.

Jamie: What’s your favorite drink to make? When you’re on the other side of the bar, what do you like to drink?

Anika: What I really like to make is a stirred cocktail, something in a Yarai glass with a nice spoon and I like that fluid motion of stirring a cocktail and chilling it that way and straining it into a chilled cocktail glass. Maybe putting a twist over it, that's a fun cocktail to make for me.

I'm almost the opposite when I come to the other side of the bar. I like tiki inspired drinks which, you know, have a lot of shaking, a lot of sizzling and all that business. I also like a French 75 or a variation on that kind of a cocktail just because I love wine and bubbles so much. I really like texture in cocktails. So I also thought of a margarita, but I think because of the salted rim. Salted rims and bubbles and all that stuff particularly with texture to me, so I always think I enjoy those cocktails with texture the most.

If you would like to learn more about how Bar-i can help you streamline your operations and maximize profits, please contact us today to schedule a free consultation. We serve bars and restaurants nationwide from our offices in Denver, Colorado.