What is the Correct Way to Connect Kegs in a Series?

In some situations, you may find that it’s beneficial for your bar to run certain kegs in a series. This will allow your high volume draft beer products to use multiple kegs in order to ensure you have enough supply on-hand to get through a busy shift without taking your bartender’s or bar back’s valuable time during the rush to change an empty keg.

However, it’s important to understand that there is a right and a wrong way to connect kegs in a series. When done properly, it can provide a significant benefit to your operations during these busy rushes. It provides peace of mind that you won’t kick a popular product during a peak business time, which would cause your customers the inconvenience of having to wait to receive their favorite beer.

But when the series is connected incorrectly, you’ll end up serving a lot of foamy beer which creates two major problems:

If you’ve struggled to get your keg series beer to pour correctly, it’s likely that you haven’t been setting up the line properly. The following tips will help you correct the problem and ensure your keg series works properly.

What is a Keg Series? 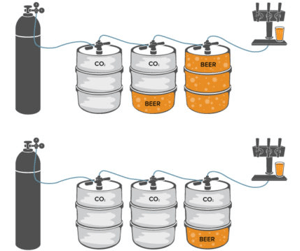 A keg series exists when you have more than one keg tapped on the same line going to the same faucet. This allows you to serve more pints of this particular draft beer product before you need to change the keg. It’s important to make sure that each keg in the series contains the same beer product since they will be served through one faucet.

The order in which these kegs are connected will have a significant impact on the way the beer pours. If the kegs aren’t in the right order, your beer won’t pour properly. Often, we’ve found that bartenders and bar backs won’t put the kegs in the correct order when changing kegs in a series. In the vast majority of cases, this is the reason why your keg series isn’t pouring properly.

How to Manage Kegs in a Series

First, you’ll want to carefully consider which draft beer products to connect in a series. Make sure you only choose high volume products. If you put slow moving products in a series, it will waste beer and increase the potential of the beer sitting around and going stale.

A keg series typically consists of one partial keg along with one or more full kegs. Your draft lines use CO2 gas to push the beer out of the kegs and through the serving faucet. Always make sure that the keg directly hooked up to the CO2 tank, called the gas keg, is the partial keg. This is the keg that will receive the CO2 and push all the rest of the beer in the series through the serving faucet.

The gas keg beer will drain into the keg closest to the serving faucet, which is called the faucet keg. Your faucet keg must always be the full keg. In situations where you have more than two kegs in the series, you’ll need to make sure that all kegs other than the gas keg are full when you set up your series.

If you connect these kegs the wrong way, your gas keg will be full and your faucet keg will end up being the partial keg. When this occurs, the beer being pushed into the partial keg will cascade down to the bottom of the keg and turn to foam. This will make the beer very foamy when it’s poured out of the faucet.

Rotating the Kegs in a Series 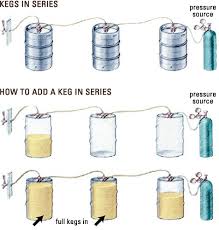 After you get through a busy shift, it will be time to manage your keg room. This includes rotating the kegs in a series to make sure it’s set up properly for the busy rush on the next night. To properly rotate kegs in a series:

This process will eliminate the situation where you’re pushing beer into a partial keg, which will result in foaming. As long as you always make sure the partial keg is the gas keg and all other kegs are full, the beer will get pushed through each keg in the series properly until it gets delivered through the faucet behind the bar.

You should use this same process regardless of the number of kegs in your series. If you only have two kegs, you’ll rotate the faucet keg to become the gas keg and add a new full keg in the faucet keg position. With three or more kegs, the partial keg will still get rotated to the gas keg position, and all other kegs in the series must be full.

Troubleshooting Problems with a Keg Series

If you’d like to learn more tips to improve the performance of your beer products, please sign up for our Draft Beer Mini Series by clicking on the button below. You can also contact us today to schedule a free inventory consultation.