How Do Sixtel Kegs and Pony Kegs Impact your Keg Yield?

One of Bar-i’s clients was experiencing poor yields on their kegs and they asked us to look into the issue in greater detail. This was a very high volume client that consistently generated over $100,000 per week in bar sales, and draft beer sales comprised a sizable portion of their business. As a result, improving their keg yield had the potential to significantly impact their bottom line.

In particular, the client felt like they weren’t getting the same yield out of their sixtel (1/6 barrel) kegs and pony kegs as they were out of their half barrel kegs. We performed some higher level analysis of their draft beer performance in order to more clearly understand the source and extent of their problems. The results were eye-opening and have practical implications for just about every bar.

Keg yield refers to the percentage of beer in the keg that is actually being sold. There are several factors which can impact your keg yield. The three most common include:

After working with hundreds of clients, we’ve found that a 95% keg yield is attainable. If you are experiencing about 5% wastage, you should consider this an acceptable figure. However, anything over that level should be addressed.

When evaluating the keg yield issues with this particular client, we encountered several challenges:

The challenges presented by this client’s draft beer system may have potentially made their keg yield numbers a little worse. However, the majority of bars don’t have perfectly working draft beer systems, so at least some element of this increased waste is likely present in every bar.

Bar-i is in the business of precisely comparing ounces rung versus poured in order to accurately evaluate the performance of each product sold at your bar. This analysis goes way beyond simply calculating liquor cost. 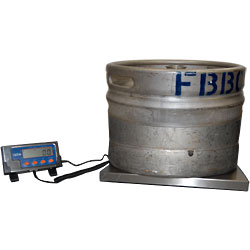 When evaluating the performance of draft beer products, we weigh each keg to precisely calculate usage of beer down to the ounce. We also write specific recipes for each POS button to match up what was poured to what was sold. This methodology provides us with the granular data necessary to evaluate the cause of our client’s poor keg yield.

In this particular case study, we aggregated the draft beer results over an 8 week period (this client receives weekly inventory audits). We filtered out all errors to ensure that the data was as accurate as possible. We then compared yield percentages from sixtel kegs and half barrel kegs since these are the keg sizes used for the vast majority of beers sold at this particular bar.

As part of this study, we calculated both straight averages and volume weighted keg yields. We also approached the problem with the following hypotheses:

This bar has 20 lines on their draft beer system. Over an 8 week period, we evaluated more than 160 different beers (the rotating taps often had more than one beer per line during the week, increasing the number of beers we evaluated). Between the bar’s high sales volume and the sheer number of beers being evaluated, we had a very good sample size. Therefore, our results are fairly significant and credible.

As part of our initial analysis, we calculated the keg yield for every beer and averaged all of these numbers together. These straight averages produced the following results:

The 17% difference in keg yield between these different keg types represents a sizable difference in performance. However, this method had the effect of assigning an equal weight to every beer evaluated as part of the study. We were concerned that lower volume beers were receiving more weight than they deserved, which may impact the accuracy of the total yield percentages calculated.

To account for this issue, we recalculated the keg yield according to a volume weight so that the calculations were a fairer reflection of how the beers were performing based on sales volume. The volume-weighted calculations uncovered an even bigger difference in keg yields:

This discrepancy makes sense. Half barrel kegs are often fixed lines, which should perform better than rotating beer lines (which typically use sixtel kegs). However, the extent of the difference between these keg yields was greater than we had anticipated.

In addition, the bar was basing the serving size for each beer on the alcohol content without considering the cost of the beer. When you sell expensive beers, we recommend using a smaller portion size. Most customers aren’t going to pay $10-12 for a 16 oz. beer. By giving them a smaller portion, you are able to price these beers in a way that keeps the cost affordable for customers while allowing you to hit your target margin.

Key Takeaways from the Case Study

By far, the most important takeaway from this study is that keg size matters. If you’re a high volume bar that uses sixtel kegs and pony kegs, you will most likely be losing money compared to what you would make if you exclusively sold beers that come in half barrel kegs. Therefore, whenever possible, we recommend that you carry beers that come in half barrel kegs to improve your profit margin.

Unfortunately, it’s not always possible to exclusively carry beers that come in half barrels. Many craft beers only come in sixth barrel kegs or pony kegs. If you are trying to cater to a craft beer clientele, you will most likely end up carrying some beers that come in these smaller keg sizes. In these situations, Bar-i recommends that you buy at least three of each sixtel keg at a time. This will cut down on wastage caused by constantly cleaning your lines.

In addition, we strongly urge you to have your business needs inform your operational choices instead of basing these decisions on a desire to please your customers. This particular client was stocking lots of experimental beers in order to cater to their craft beer clientele, but this buying decision wasn’t being informed by their numbers. This exacerbated their problem with poor keg yields. If they had evaluated the impact these experimental beers were having on their profit margin (due to poor keg yield), they could have adjusted their product selection accordingly in order to maintain a more sustainable profit margin.

After reviewing our analysis, our client arrived at a rather pragmatic solution to the problem. They installed a kegerator in their upstairs bar and turned this area into a “beer nerd” section of the bar. By installing a kegerator, they will now have a much shorter line which should improve their keg yield considerably. This allows them to offer the experimental beers in sixtel and pony kegs which appeal to their clientele without taking a significant hit to their profit margin. In the main bar area downstairs, they are now only serving beers that come in half barrel kegs.

You can only make good management decisions when you possess detailed data regarding the performance of your bar. If you’re still in the “dark ages” where the only metric you evaluate is your liquor cost, you won’t be able to obtain the granular data necessary to make informed decisions about the way you run your operations.

By using a sophisticated liquor inventory system, you can identify instances where your management decisions are hurting your profit margin and make the necessary adjustments to maximize profits while still meeting the needs of your customers.

If you would like to learn more about how Bar-i can help you streamline your operations and maximize profits, please contact us today to schedule a free consultation. We serve bars nationwide from our offices in Denver, Colorado.