How to Optimize Your Draft Beer System

For many bars, draft beer and liquor are the most important product categories in terms of sales volume. One of the important factors that distinguishes these categories is that draft beer will always experience some degree of natural waste. This issue is unique to draft beer due to the foaming that occurs. In addition, there will always be a small amount of beer left in the keg when you change it out meaning 100% Accountability isn't realistic. 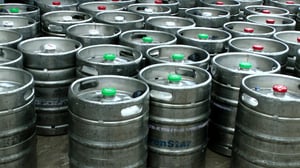 Based on a large data sample that we’ve accumulated from over 7,000 detailed audits verified down to the serving and performed on clients in 23 states, we’ve found that a 95% keg yield is a reasonable expectation. However, you may potentially experience a substantially smaller keg yield if you don’t take the steps necessary to properly optimize your draft beer system.

There are two important reasons to not only maximize your keg yield, but have a strong understanding of what this percentage should be for all of your kegs. The obvious reason is that when you aren’t maximizing your keg yield, you’re wasting more beer, which will cut into your profit margin on each keg.

But almost as importantly, a poor keg yield creates a smoke screen for your staff. When your system wastes too much beer, it allows your bartenders to give away free beers without you being able to effectively track these giveaways. Since everyone expects a significant amount of waste in your kegs, it will be virtually impossible for you to be able to determine how much of your poor keg yield is being caused by a poorly performing draft beer system vs. bartenders giving away too much product.

Spending money to get your system to work properly is critical. While it may be painful to spend this money, it’s a lot cheaper than losing retail dollars on a regular basis due to your staff giving away a larger number of beers than would be considered acceptable. The following steps will help you optimize your draft beer system to ensure maximize your keg yield and ensure you're in control of the amount of beers being given away.

The craft beer industry has exploded in recent years, and it’s important to have a strong beer selection that will appeal to the varied tastes of your customers. While it’s in your best interest to have an exciting tap list, it’s important to understand that in most instances, less is more when it comes to your draft beer product mix.

We encourage the bars we work with to offer a carefully curated lineup of beers that the staff can be passionate about and discuss intelligently with your customers. It’s also a good idea to have the brewers come into your bar and educate your staff on their product so that your servers and bartenders can tell the story behind the beer you serve. Many craft beer aficionados will appreciate this background information about the beers they’re drinking.

If you have too many beers on tap, it will not only be challenging for your staff to acquire this detailed knowledge about the products you serve, but it can also cause your draft system to work less effectively. There are a variety of problems that occur when you have too large of a beer selection for your sales volume, and this will ultimately have a negative impact on your keg yield. Usually this very large selection won’t result in selling more beer. Instead, you’ll just waste more money since lower volume per keg tends to reduce overall yields.

Temperature and pressure account for approximately 95% of the performance of your draft beer system. It is relatively easy to ensure the pressure is correct. You can use individual regulators on each line to make sure your beers are always being served at the right pressure. Temperature, on the other hand, is a bit more complicated to regulate.

You can perform the following test to see whether your draft beer system is running at the proper temperature:

We’ve created a draft beer performance log sheet to help you track this information. You can use this free worksheet to note beer temperatures and the extent to which a particular beer line turns out foamy beer. We recommend printing out a separate worksheet for each beer line. When you check the performance of your beer lines on a regular basis, you’ll acquire the data necessary to determine whether beers are performing poorly due to issues with your draft system or because your staff is giving away too many beers. Click the button below to download this worksheet for free.

What Gets Measured Gets Managed

There are two ways you can effectively measure the performance of your draft beer system. Make sure you are using the following keg values when you measure this performance:

If your POS system allows you to run reports between two specific minutes in time, you can have your bartenders note the time they changed a keg and then run a sales report for the exact period down to the minute between when the keg was installed and when it gets changed out after being used up. You can then compare the sales for the keg with the amount of beer that was actually used to determine how well that product is performing.

Most of the time, you won’t be able to run this test. This may be due to the fact that your POS system doesn’t have this capability, or because it is often too busy for your bar staff to jot down times during a rush. In these situations, you will need to weigh the keg to see how well it is performing:

It’s important that you use a standard pouring assumption when measuring the performance of your beers. Also, beware of items that can potentially make your data inaccurate such as:

A Sophisticated Inventory System will Make this Process Easier

This process is a good idea to do as a one-off to get a baseline of how your beer products are performing. However, it’s a lot of work and not necessarily sustainable to do every inventory period.

If you want to dial in your draft beer performance, it will require this level of granular data on a regular basis. The most effective way to get this data in an accurate and time-efficient manner is to use sophisticated inventory software.

Bar-i’s service will calculate the usage of all of your beer products down to the serving and compare this to the amount of beers you sold during each inventory period. This will allow you to see the performance of each individual beer product you serve. Ultimately, this is the most effective way to ensure that all your draft beer products reach our target goal of a 95% keg yield.

If you would like to find out more about how Bar-i can help you streamline your processes and maximize your profits, please contact us today to schedule a free consultation. We serve bars and restaurants nationwide from our offices in Denver, Colorado.

Still hungry (or thirsty) for more draft beer knowledge? Check out this article from our friends at Buzztime on 10 cool brewery technologies: https://www.buzztime.com/business/blog/brewery-technology-on-tap-the-10-best-apps-tools-and-more/