How to Price Draft Beer

The craft beer explosion is well underway and if your bar hasn’t addressed this phenomenon, you’re going to be left behind.

The bar business is more competitive than ever. Customers are becoming increasingly savvy and are looking for interesting draft beers. By offering a wider tap selection, more frequent tap rotation and guest tap takeovers, you can make your bar more attractive to craft beer drinkers. Since this niche of bar customers is growing rapidly, it’s in your best interest to meet their needs.

There are several other reasons why you may want to offer a robust selection of draft beers:

If you are going to cater to a craft beer clientele, you will need to get the “behind-the-scenes” aspects of this service right in order to ensure this aspect of your business remains profitable. Perhaps the most important issue to work out involves how to price draft beer. 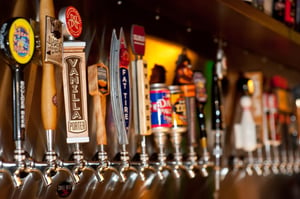 Just a few years ago, most bars typically carried between 6-10 beers on draft. However, the rapid rise in the popularity of craft beers has had a significant impact on draft beer sales. Today, many bars have 20-40 taps in order to showcase a wider variety of craft beers.

The explosion of the craft beer market has created some new challenges associated with pricing draft beer:

When considering how to price draft beer it’s good to identify a liquor cost range that you’d like to achieve for your draft beer. Given a certain portion size and a certain cost per draft beer, what price will allow you to achieve your target liquor cost?

Once you’ve identified your target liquor cost for draft beer, you must also consider the following factors:

Determining How Much Profit You Make Per beer

The following chart breaks down the amount of profit you’ll make per beer based on the cost of a standard 15.5 gallon keg:

* To calculate this cost per beer, divide the number of ounces in the keg (1984 oz.) by a 14.5 oz. serving. This will give you your wholesale cost per pint.

** If you’re aiming for a 20% liquor cost simpy multiplying the cost per beer by 5 will give you the price to charge to each customer. This is the price you need to charge per beer based on the cost of the keg and serving size. You should always round up to a more sensible and convenient price for the customer.

*** Keep in mind that the while the liquor cost is set at 20% in this example, the actual profit per beer increases as the cost of the keg increases. The most common area on this chart for typical craft beer kegs is the $100-$120 price range. If you’re serving higher end beers and making a larger profit margin on each beer, it’s an opportunity to de-emphasize liquor cost and price these beers more aggressively.

The reason for this is that you’re still going to make more money per beer when you sell high end beers. If you can price them more aggressively, these beers will stand out in terms of value which should entice more customers to purchase them. Ultimately, this will result in selling more beers that yield a high profit per beer (though at a lower margin). On the other hand, if you price your low end beers more aggressively, it will most likely cause you to increase your sales of these lower profit margin items.

Therefore, by pricing your high end beers more aggressively, you can boost your overall profits and draft beer sales even though your margin per beer will be a little lower. When thinking about your target liquor cost, you may want to shoot for 20% on low end beers but aim for a slightly higher liquor cost on high end beers (approximately 25%) since it will benefit your profitability in the long run.

Calculating the percentage cost on draft beer is a 3 step process:


If you didn't come here for a math lesson simply read on and we've made a free downloadable calculator which will do all of this for you on any sized keg simply by entering the prices etc. Bar-i’s draft beer pricing tool makes the process easy and offers several important benefits:

Simply click the image below to instantly download our Excel based Draft Beer Pricing Calculator for FREE!

To receive customized recommendations for how to price draft beer at your bar or to schedule a free profitability consultation, please contact Bar-i today. We serve bars and restaurants nationwide from our offices in Denver, Colorado.