What is the Normal Waste Level for Draft Beer?

The craft beer industry has exploded in recent years, and this has changed the way many bars approach serving draft beer. The old standard saw the majority of bars have 6-8 taps, but it’s now common for many establishments to have as many as 20-40 taps in order to cater to their craft beer-drinking clientele.

The growth of the craft beer industry has also been associated with a massive increase in the variety of beers available. There are over 350 breweries in our home state of Colorado alone, and many other states have similar numbers of breweries offering their products to eager beer drinkers. 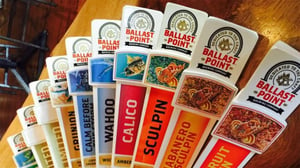 The cost of beers has changed as a result of the craft beer revolution. Beer sales used to be dominated by big national brands such as Budweiser and Coors, but now their market share has been eroded by smaller breweries that offer more unique-tasting products. As a result, there is pressure on many bar owners to offer the specific beers that are trendy and popular, and this has caused many bars to operate on a rotating tap system that provides customers with a wider variety of options over time. These changes have caused the average price per serving to rise.

Finally, the popularity of craft beers has caused draft beer to become elevated as a product category. Many bars are seeing less interest in bottled beer as a growing percentage of their customer base prefers to order the craft options offered on tap.

What does all of this mean for your business? The increased cost, variety and rotation of options places more focus on your draft beer operations. As a result, there is more opportunity and risk associated with draft beer sales than ever before. This makes it crucial to limit the level of waste for your draft beer products so that you can maximize the profits available from this increasingly popular alcohol category.

When we talk about pouring assumptions for draft beer, we’re focusing on the ideal amount of beer that should be put into the glass, not the size of the glass since you typically want to serve draft beer with some head.

That being said, draft beer is most commonly served in a 16 oz. glass. For a pint of beer, we typically recommend that the head be roughly the height of a dime. This equates to about 14.5 ounces of beer in a 16 oz. glass. As a result, Bar-i generally operates on the assumption that there will be 14.5 oz. of beer poured every time a pint is served.

If you serve beers in a variety of glass sizes, this will obviously change your pouring assumptions. In general, we don’t recommend using multiple glass sizes since this creates several challenges for your business (more on this later).

The other three alcohol categories (bottled beer, liquor and wine) are easy to pour fairly exactly. Bottled beer has no waste, liquor drinks can be poured fairly accurately with training, pouring practice and/or the use of jiggers, and wine is easy to portion accurately due to a standard 6 oz. pour. However, you’ll always experience some degree of natural waste when you serve draft beer.

Natural waste for draft beer products typically occurs as a result of:

Fortunately, you have the ability to control many of the factors that impact the amount of natural waste you experience. By taking the proper steps, you can significantly limit this waste and improve your keg yield.

The temperature of your draft beer system is the most important factor to get right if you want to minimize your natural waste. Bar-i frequently works with a company called Draft Profits due to their extensive knowledge of draft beer systems. According to the experts at Draft Profits, your ability to serve beer correctly is impacted by the following factors:

In order to limit waste, it’s crucial that you keep the temperature of the beer consistent throughout your entire draft system. You can test the consistency of your own draft beer system by conducting the following experiment:

If there is a significant difference in these two temperatures, you have a beer-cooled system. This means your beer isn’t being chilled all the way through the system. Instead, the first few cold beers getting poured through the system at the start of the day are cooling down the lines. This temperature change creates unnecessary foaming with your beer.

Different types of beers require different pressure levels in order to pour correctly. You’ll want to monitor the pressure of your lines to ensure optimal performance.

Ideally, draft beer systems give you the ability to change the pressure of each individual line. This ability is required in order for you to ensure that all lines will pour properly. When you purchase a new draft beer system, you can add regulators that allow you to adjust the pressure on each line. These regulators are relatively inexpensive, and they will help you ensure that every beer is being poured at the proper pressure.

If your existing system doesn’t have these regulators and your keg yield is good, then there’s no need to retrofit your system. However, if you have a poor keg yield, you may want to take this step to make sure a pressure issue isn’t causing excessive natural waste.

You will always experience some problems serving the first few beers that come through the line each day, resulting in more natural waste for these first few beers being poured. The sales volume for a particular beer will determine how significant of an impact this initial early-day foaming will be.

Therefore, you’ll have a higher yield on a keg when a significant percentage of the beer in the keg is poured throughout the day. If you notice that some of your beers experience a very low sales volume, you may want to consider swapping them out for more popular selections since this will help improve your keg yield.

Therefore, you should try to match the number of lines on your draft system to the volume of beer you pour each week. If you don’t take this step, you will have a poorer keg yield. 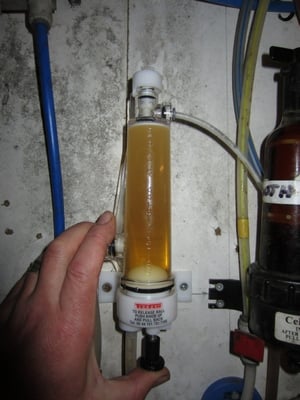 It’s important to install a Foam on Beer detector (FOB) on your draft beer system. When the FOB detects that no more beer is coming into the lines, it will shut off the line. Without the FOB, the beer line will be mostly full of air after the last beer in the keg gets poured through the line. When you tap a new keg, the line will have warmed up and you’ll have to reintroduce beer al the way through the line to regain a consistent temperature. As a result, you’ll end up wasting a lot of beer every time you tap a new keg.

FOB systems are particularly important if your keg room is far away from the taps, requiring a long draw system. The more feet of line you have, the worse your system will perform if air gets into the lines at the end of each keg. In these situations, using FOBs will significantly reduce the foam and wastage every time you change a keg.

Bar-i had a high-volume client that was using a lot of sixtel kegs in order to serve a large number of small-batch beers. This increased their waste, especially when they switched to a different type of beer on a line. We found that they were experiencing a 29% difference in their yield on the sixtel kegs compared to the full sized kegs.

To avoid this issue, one solution is buying three sixtel kegs at a time so that you can change to a new keg of the same beer twice before you have to clean out the line. This will limit the impact of these extra keg changes.

Certain beer companies such as Stella may pressure you into using their own unique glassware when you serve their beer. The philosophy behind this is that if your customers see people drinking beers out of a Stella glass, they may be more inclined to order a Stella. While this may help you sell more Stella, it may not be in the best interests of your bar. 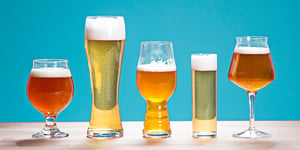 Instead of using a variety of signature glassware, we recommend that you limit your beer glasses to two standard sizes – a regular size pint and a 10 oz. glass for high-alcohol beers.

Keep in mind that if you choose to use signature glassware, it adds complexity to your processes and increases the difficulty of tracking whether beers are being served correctly. Each beer will always need to be poured in the correct glass whenever it is served to ensure the correct portion size. This can become problematic if you don’t have enough of each glass size at your bar.

If you run out of a particular glass size, a beer will end up being poured in the wrong glass and therefore in the wrong portion size. This situation complicates your operations when the goal should be to streamline them.

Cleaning the lines on your draft beer system involves pushing cleaning fluid through the lines. This wastes any beer that is left in the lines from the previous keg. It also wastes beer from the new keg that will be tapped since you need to let a small amount of beer run though the line to ensure all cleaning fluid is gone before a beer is served to your customers.

Therefore, the less frequently you clean your lines, the less beer you’ll waste. Cleaning your lines every 2-4 weeks is an ideal timeframe to limit natural waste. We typically recommend that our clients perform line cleaning in two-week intervals to make sure the lines stay sufficiently clean.

Bar-i is able to accumulate data on how a variety of bars operate across the 20 states where we have clients. While our clients know their specific business better than we do, this large amount of data allows us to gather a unique industry perspective from a broad range of bars operating in a large number of states. 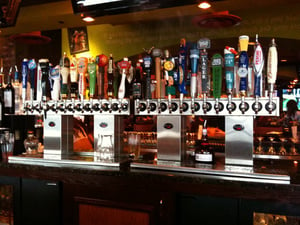 Based on this vast experience, we’ve found that when you optimize the performance of all the factors discussed above, you should be able to achieve a keg yield of 95% or better. We’ve found that when bars have too many lines for their sales volume, it typically drops their keg yield to about 90%. This is a significant difference, and it should provide a strong incentive to figure out the right number of lines for your volume.

We’ve also seen that the reverse can improve your keg yield. One of our high-end bars does a really high volume of beer sales and only uses five lines. Their keg yield typically falls in the 96-97% range.

Keep in mind that these performance numbers are only calculating the impact of natural waste on keg yield. They aren’t accounting for shrinkage caused by bartenders giving drinks away without ringing them in. When this occurs, it will cause your keg yield to drop even lower.

Unless you have a sophisticated inventory system that compares what was poured vs. what was sold, you won’t be able to accurately measure your keg yield. Bar-i can provide you with this important data and give you helpful tips that will improve the performance of your draft beer system in order to minimize the level of natural waste you experience. Ultimately, this will help you maximize the profitability of your draft beer products.

If you’d like to learn more about how Bar-i can help you streamline your operations and maximize profitability, please contact us today to schedule a free consultation. We serve clients nationwide from our offices in Denver, Colorado.