One of the guiding philosophies behind Bar-i’s service is to leverage the most advanced technology available to provide more effective results for our clients. As a result, we have a deep appreciation for other companies that are trying to revolutionize the bar industry with innovative technology. One of these companies is iPourIt. 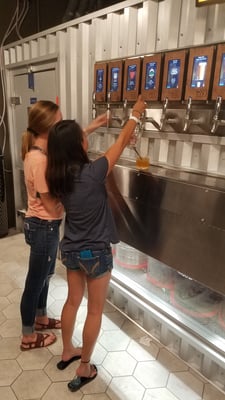 iPourIt has developed self-pouring beer and wine dispensing systems, making it possible for bar patrons to serve themselves. The company is still relatively new – they’re only 5 years old – but they’re already starting to make their mark in the bar industry. Their technology has been adopted by more than 50 bars nationwide, their dispensing systems have poured over 53 million ounces of beer, and more than 500,000 bar patrons have already taken part in this new type of bar experience.

Our co-owner, Jamie Edwards, recently visited a bar in Casper, Wyoming that uses the iPourIt self-serve beer dispensing system. He was impressed by many aspects of the system and the service it provides. We’ve decided to review this technology in order to provide bar owners with greater insight into this exciting new technology.

Is this technology right for your bar? Unfortunately, there’s no straightforward answer to this question. Ultimately, it will depend on a variety of factors including your bar’s concept, your target demographic and your willingness to adopt new technology in order to provide your customers with a unique experience.

All of the iPourIt technology is programmable, enabling you to make any adjustments necessary to meet the unique needs of your bar. The system contains a series of self-pouring beer (or wine) taps that are activated by a wristband that each customer receives when they arrive at the bar.

Customers must show their ID to receive a wristband. At this time, a beer guru is available to talk with customers in order to explain how the iPourIt system works and discuss the different beers on tap. 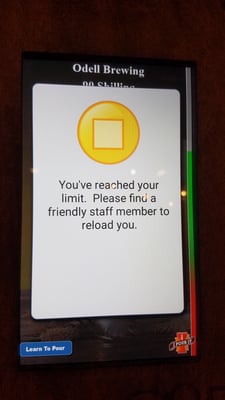 The default programming for iPourIt systems allows customers to receive 32 ounces of beer before being temporarily cut off. However, you have the ability to change this cut-off limit if you want. Every jurisdiction has different laws regarding these cut-off limits, and you’ll need to abide by your local laws when setting your limits. But based on your local laws, you can potentially adjust the limit higher than 32 ounces, and you can always adjust the limit lower than 32 ounces if you prefer.

Once a customer has reached their 32 ounce limit, they will need to check in with the beer guru. This ensures that people are properly communicated with when the limit is reached to make sure that no one is being overserved. If the beer guru feels that you haven’t been overserved, he’ll enable your wristband to dispense another 32 ounces of beer.

Customers pay for all of the beer they drink when they’re ready to leave. Beers are charged by the ounce, and each beer has a different price per ounce.

Setting Up an iPourIt System at Your Bar

The exact price of an iPourIt system depends on the configuration. Systems range between $1100 and $1600 per tap, and the average cost per tap is approximately $1350. You have a significant amount of flexibility regarding the number of taps you install. You can start with a moderately-sized 10-tap system or choose to install upwards of 40 or more taps. The right option for you will obviously depend on the unique specifics of your bar as well as the amount of capital you have to invest in the technology.

In addition to the self-pouring tap dispensers, you’ll also need to purchase the other parts to the system, which include the check-in station where the beer guru will provide customers with their wristbands.

It is possible to retrofit an existing draft beer cooler with an iPourIt system, so this can potentially save you some money if you already have a cooler that that can be used for this service. In most instances additional components will need to be added to transform your existing draft beer system into a self-serve system, but you can usually use your current beer cooler if you prefer.

Benefits of the iPourIt System

The two primary benefits to using the iPourIt system strike a chord with us here at Bar-i:

The typical yield on a keg of beer is 76%, but the keg yield when you use the iPourIt system is approximately 99%. This means you’re getting almost 25% more beer out of each keg, which will significantly boost your profits.

The average iPourIt user is a 32 year old male who goes to the beer wall 5.5 times per visit and pours 4.7 ounces per trip to the wall. This equates to a little over a pint and a half of beer. However, this average user is also spending $14.35 on beer during his visit, which is significantly more money than most bars receive for a pint and a half of beer. Therefore, the system is also increasing the revenue per beer coming into the bar.

In addition, data for all of these drinkers is logged into the system and collected by iPourIt. Each bar then receives the data collected on all of their customers. This will give you detailed information about your customers, the beers they drink and the price points at which they’re willing to purchase beer. This will help you formulate an effective business strategy that is based on hard data.

iPourIt can also leverage data from similar types of establishments that use their system to give you a point of comparison. This additional competitor data can be very helpful in setting your pricing strategy.

Other benefits of using the iPourIt system at your bar include:

No product is perfect and while there are many strengths associated with this system, there are also a few drawbacks. These include:

iPourIt Provides an Interesting Concept that Can Differentiate Your Bar

Restaurants are adopting new technology at increasing rates, and that trend doesn’t seem like it will change anytime soon. iPourIt is one of the latest examples of this technology boom, and it definitely provides your bar with a unique concept that will help you differentiate yourself from your competitors. If you would like to be on the forefront of bar technology and provide your customers with this type of unique experience, then iPourIt may be an excellent option to consider.

However, it seems unlikely that the iPourIt system will ever gain enough widespread usage to place a bartender’s job prospects in jeopardy. People are engrained with the human element of service, and many customers enjoy the experience of talking to their bartender throughout the night, especially during times when business is slow.

In some ways, this may be a potential limiting factor to the adoption of iPourIt systems. While many bars may eventually start using it, there will always be places that want to maintain the old school feel of having a bartender who pours the drinks for their customers. Therefore, while iPourIt is a very cool concept, it must be the right fit based on the concept of your bar.

If you’d like to learn more about how Bar-i’s inventory technology can help you streamline your bar’s operations and maximize profits, please contact us today to schedule a free consultation. We serve bars nationwide from our offices in Denver, Colorado.